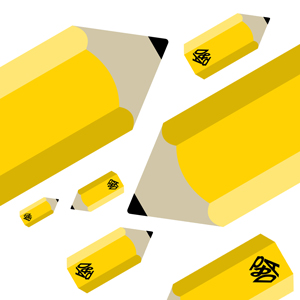 With entries closing on 01 February – just days away – D&AD have sent out a polite reminder to creative folk with ideas on scooping a Yellow (or even Black) Pencil this year, that time is a’tick-tocking away to get entries in.

Over the last 49 years, D&AD has celebrated outstanding design and advertising that has influenced generations of creative talent. This year, their ambition is to make the 50th D&AD Annual the ultimate benchmark in international commercial creativity, setting a new standard for future generations of designers and advertising creatives.

Unlike other shows, D&AD only awards work of the highest standard, meaning that the quantity of top awards given fluctuates year on year and that D&AD juries will not award any entry if it does not merit the highest accolade. The scrutiny and rigour imposed by the internationally acclaimed judges is legendary, and ensures that only very best work receives the coveted Yellow and Black Pencils.

Judges for the 2012 awards have already been announced and this year’s entries will be scrutinised by such Industry greats as the UK’s John Hegarty, Brazil’s Anselmo Ramos, Prasoon Joshi from India, Yuya Furukawa from Japan and David Droga from the USA, amongst others.

“D&AD’s 50th Awards are a milestone for the advertising and design industries. Over the past five decades, The Annual has remained the bible of commercial communication and getting a Pencil is the high point of many careers. This year, the juries are aware that they will be looking for work that is worthy of inclusion in the 50th Annual, and the scrutiny of the work will reflect this. Creatives that manage to get In Book in 2012 can honestly claim to be at the top of their game.” John Hegarty, Founder, Chairman and Worldwide Creative, BBH London

“Even in changing times, D&AD has kept its relevance and integrity intact as an award show.  This year I’m judging the writing category and I can’t wait to see new approaches and  needless to say the sheer craft. I am truly looking forward to seeing work that holds great promise.” Prasoon Joshi, Executive Chairman and CEO, McCann Erickson, India

“I am humbled at the thought of judging the D&AD entries in this, the organisation’s fiftieth year.  All my working career it’s been the benchmark of true creative excellence and its fantastic to see that its reputation continues.” Tony Clewett, Creative Director, Draft FCB, New Zealand

Work is awarded at four levels: In Book places the work in the D&AD Annual; Nomination shortlists work to be considered for Pencils; Yellow Pencils are awarded for outstanding work; Black Pencils are awarded to ground breaking work. All awarded work appears in the D&AD Annual, and In Book and Nomination winners can now claim Pencil Slices to mark their significant achievement.

Whatever your thoughts on design awards these days, when it comes down to it we’d all love a Yellow Pencil to casually use as a bookend and to show our Mums if nothing else ~ so get cracking, you’ve got to be in it to win it folks. For more details visit www.dandad.org/50fwd