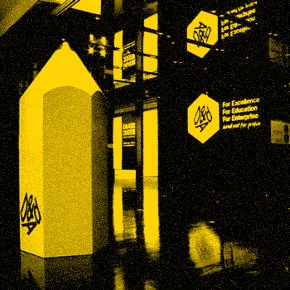 Following on from news of Neville Brody’s 50Fwd identity, D&AD have released a 2 minute retrospective video celebrating 50 years of design excellence as they open entries for the fiftieth annual D&AD Awards.

More work from outside the UK than ever was recognised in 2011 as international agencies and creatives increasingly sought to get their hands on a Yellow or Black Pencil. This time round D&AD are looking to increase entries from Europe further, their ambition to make the 50th D&AD Annual the ultimate benchmark in international commercial creativity, in turn setting the standard for future generations of designers and advertising creatives.

D&AD say the awarded entries from European countries rose substantially, with D&AD celebrating work from mainland Europe – the numbers were up from 113 in 2009 to 132 in 2011.

Tim Lindsay, CEO of D&AD said: “The D&AD Awards in 2012 mark a watershed moment in our history. While D&AD was born fifty years ago at the heart of the UK advertising and design industries, we are now an organisation that has spread its wings globally, recognising that creative work competes in a global market and that, if the UK competes on that stage, we should set standards against the work from all the players on it.

“The quality of work from across Europe is remarkable. In part that is because of D&AD’s heritage and reputation for awarding only the best talent, but it is also due to the fact that quality of the work entered has improved. Campaigns from across Europe have picked up Yellow Pencils over the past three years and we believe that this track record will only encourage more work this year.”

Hot topic and in tough economic times for the design and advertising industries, many may question the economics of awards entries, D&AD claim this year’s awards are the most cost-effective to date, costing from £85 to enter.

The scrutiny and rigour imposed by internationally acclaimed judges is renowned, ensuring that only the very best work receives the coveted Yellow and Black Pencils. Judges award work at four levels: In Book places the work in the D&AD Annual; Nomination shortlists work to be considered for Pencils; Yellow Pencils are awarded for outstanding work; Black Pencils are awarded to ground breaking work. All awarded work appears in the D&AD Annual, and In Book and Nomination winners can now claim Pencil Slices to mark their achievement.

Continues Lindsay: “We want to ensure that D&AD is a genuine reflection of commercially-driven creative talent, rather than an awards reserved for simply those who can pay to enter them. We know that a Yellow Pencil for an agency or an individual is globally recognised as the height of creative achievement, which means that the Awards deliver recognition – and business – for all of those who win them.”

Arguably the pinnacle of recognising creative achievement across the design, advertising and digital industries, the D&AD Awards have been running since 1962 when the organisation was founded by luminaries including David Bailey, Terence Donovan, Alan Fletcher and Colin Forbes. From the 2,500 entries in that first year, the Jury of 25 awarded one Black Pencil and 16 Yellow Pencils to outstanding creative work from across the design and advertising industries in the UK.

The 2011 D&AD Awards received work from 64 different countries. The Jury (now made up of 140 judges) awarded 53 Yellow Pencils and six Black Pencils, with the body of work encompassing the range of digital, advertising and design craft disciplines. Click here for information on how to enter this year’s awards.

…back to the video, here it is. It’s quite TV advert-heavy but see how many treats you can spot: